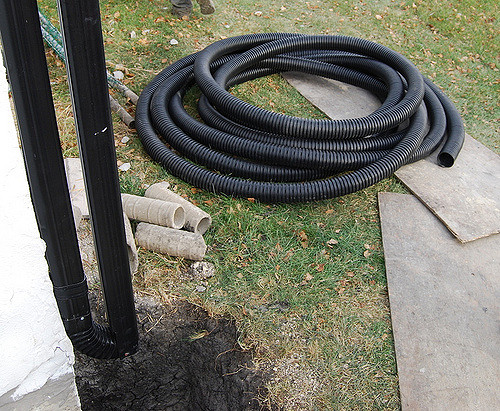 Weeping tiles are an important part of your foundation, as they drain excess water away from the walls. But weeping tiles aren’t only found there – they are key to septic systems, too! For homes with a septic system, you may know them as “leaching lines” that send liquid to what’s called the tile bed, leaching bed, or leach field.

The conventional septic bed has two parts: a septic tank for solids and scum, and a tile bed for the effluent in which to drain. Household waste that comes from bathrooms, the kitchen and other rooms with drains flow into the septic tank. Here, the solids separate from the liquid (politely called “effluent”), which flows into a weeping tile system.

How Weeping Tiles Work In the Septic Bed

Through gravity, the perforated pipes of the weeping tile system collect liquid waste and direct it out of the system and to the leach field. Most of these are PVC plastic with a series of holes drilled in the bottom to allow the wastewater to flow into the pipe and the gravel surrounding the pipe.

Newer septic systems must have an effluent filter that captures any remaining floating suspended solids and keeps them from entering the actual tile bed. Too many solids in the drain field will speed up the wear of the trenches in the septic bed.

How Far Below Ground Should The Weeping Tiles Be?

The right depth is the key to getting liquid waste to the leach field. The weeping tiles sit in trenches dug in the soil below the tank, and they send the effluent to the leach field, dropping at least an eighth of an inch per foot. When installed, the pipes are at least half-a-foot in the ground, but most are between two to three feet deep. The right depth depends on the local soil and water tables, which can vary greatly, especially in rural areas. 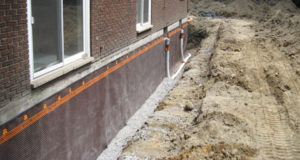 All the perforated pipes heading to the leach field have to be at the same level for even distribution. A foot of gravel covers the trenches in which the weeping tiles sit, with geotextile fabric covering the leach lines to act as a weed barrier. The trenches are then backfilled with a foot or two of native soil atop.

The solid waste must be cleaned out every two to three years, but septic systems with leach fields are very safe for the environment. The small holes in the drainpipes let the wastewater seep into voids around the drain gravel. It then seeps into the ground, where soil bacteria will naturally filter the wastewater. The type of soil is very important to this process: it must be coarse enough to let water flow through it, but also fine enough to slow down the filtration and let the bacteria treat it. All in all, it’s a very efficient system!