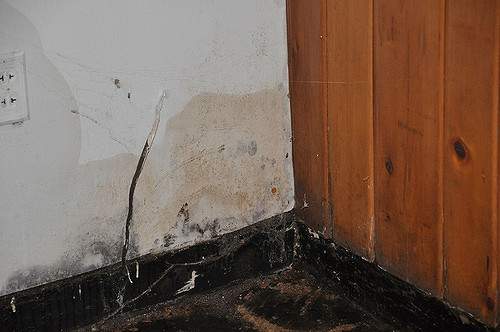 Water coming into a basement doesn’t only damage the structure of a home and what’s inside – it can cause dangerous mould growth, too. Mould and mildew start growing within 24-48 hours of even the smallest amount of water exposure, and if left longer than two days, the problem can spread far beyond where the water damage is taking place.

Homeowners can prevent this by taking steps to eliminate the moisture, stop it at its source, and remove the mould as soon as they notice it’s there. Here’s why you have to move quickly to solve your moisture problem!

How Does Mould Spread?

Mould is a fungus, and like all fungi, it spreads by sending out spores. These are tiny airborne particles that are invisible to the naked eye, and when they land on the right surface for growth, they can take control. While they thrive in damp, humid environments, spores are everywhere in nature, which is why mould seems to spring out of nowhere.

When mould starts to invade a home, it can threaten the health of everyone living inside. Exposure is especially dangerous for those with breathing problems, allergies, and asthma. So when excess moisture penetrates a home’s foundation or starts in an interior leak, the homeowner doesn’t have a lot of time to waste. 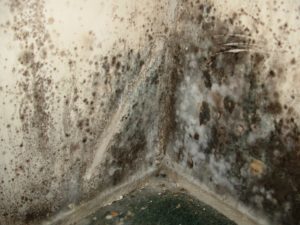 The American Environmental Protection Agency (EPA) says that mould typically takes 24 to 48 hours to grow under the right conditions. It’s important to stop leaks and remove water-damaged material right away because the mould spores that find a home on damp surfaces won’t become visible until about 18 to 21 days. By the time one notices any dark spots, the mould is likely to have spread to other areas of the home, often unseen on the inside of walls.

The type of surfaces, the amount of moisture, and the temperature of the area all factor into mould growth. In a home, mould grows faster on softer surfaces like waterlogged drywall in darker, warmer (20 degrees Celsius or higher), and more humid conditions. Even if the environment isn’t perfect, the longer a homeowner waits, the higher the chances are that spores will spread. Once the mould is growing, it can fill the air with more spores and spread onto other surfaces in a home, wrecking its structural integrity and increasing the likelihood of serious health hazards for the occupants.

Taking Care Of The Water Damage

If you’re a homeowner, what can you do to prevent mould growth? You have to act fast, so it’s important to stop the source of water and moisture as soon as you notice it. The best way is to do regular checks of your foundation. By eliminating the moisture before mould has had the chance to take root, you can decrease the chances of one spot spreading through the whole home.

Internal sources like leaky pipes are easier to spot and fix, and a plumber can solve them for you. Basement and foundation problems are trickier; if you have a finished basement with drywall but there aren’t any signs of water damage, go around the perimeter with a moisture meter. If it detects any problems, call your local foundation and basement waterproofing experts ASAP!

It isn’t easy to notice moisture problems until it’s too late. After the plumber or basement waterproofer has stopped the source of the damage, you may need to bring in a water damage restoration company. They can eliminate the entire spread of mould, as they have the equipment that can dry out the place quickly and the skills to bring the walls, flooring, and other parts back up to code.

Whatever your moisture situation, don’t think you can wait it out! Especially in humid basements, mould growth is very common and very hazardous. If you notice excess moisture there, set up a dehumidifier and call us for an inspection as soon as possible!